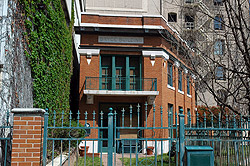 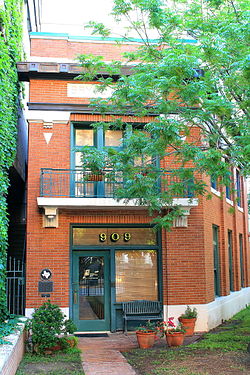 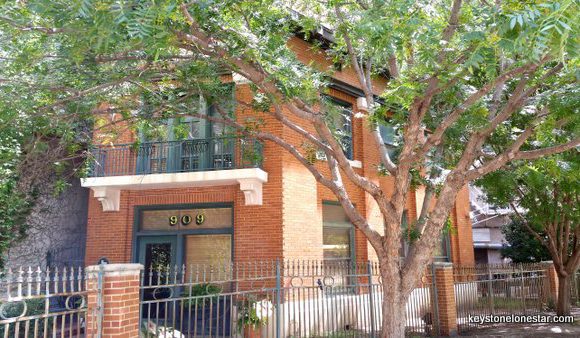 This small two story building housed the offices of William J. Bryce, former Mayor of Fort Worth and developer of the Arlington Heights Subdivision.  Bryce was a brick mason by trade, but later turned to general construction. His contracting firm built many of the early Downtown buildings, including his own.  The building sits on the perimeter of Hyde Park, where the city’s two street grids intersect.

William Bryce served the city as builder, civic leader, and mayor from 1927 to 1935. His work as contractor for Camp Bowie, Tarrant County (1917), a major World War I training facility, earned him an army commendation. He and Marshall R. Sanguinet were builder and architect for many prominent commercial buildings and residences, including Bryce’s office and his home, Fairview (1893).

In 1982 a fire severely damaged the interior of the Bryce Building. The structure was abandoned for several months and was eventually “saved from the wrecking ball” and painstakingly restored to its original use as an office building by Joe and Betty Ambrose. An interior stairway and elevator were added to enable a single tenant to occupy the building. The Bryce Building was listed on the National Register of Historic Places in 1984 and is a Recorded Texas Historical Landmark. The building is now home to law offices.

The two-story, 2,500-square-foot structure employs an adaptation of Classical Revival style. It conforms to the shape of its site, wedged in the shadow of adjacent taller structures. Three of the five façades have decorative embellishments, while the north and east sides face other buildings and have little ornamentation. The exterior brick, undoubtedly furnished by Bryce’s Denton Press Brick Company, is hard fired with iron ore. An incised panel of cast stone, with the inscription “Bryce Building” in Roman style letters is positioned below the copper cornice and cast-stone coping. The second-story bay above the entry is composed of multipaned panels that serve as doors to the small balcony, which rests on stone consoles. The building’s southeast corner is truncated at the first story to enable vehicles to make the narrow turn. Offices of the Bryce Building Company and its subsidiaries occupied the first floor; the second floor was leased out.