Jonathan Borofsky’s “Man with Briefcase” has become a landmark at the western entrance to downtown Fort Worth. The 50-foot tall brushed aluminum sculpture rises above Burnett Park with a width of 22 feet and weighing 24,000 pounds. In 2000 four bronze sculptures titled “The Backs” by Henri Matisse were relocated from the park to the Kimbell Museum and two years later they were replaced by the Borofsky sculpture. The sculpture inspires lots of questions and discussions, with many people wondering who the man is. Many people believe it is Charles Tandy, however the sculptor does not identify a particular person, but rather refers to an “everyman” business person. The placement at the prime spot at the gateway to the downtown district gives Fort Worth a very metropolitan feel.

Jonathan Borofsky is a Boston artist is known for works in many different media but his most recognized works include his large scale public commissions which can be found in cities across the world.  Man with Briefcase is but one iteration of this particular design which can also be seen on the lawn of the Smithsonian American Art Museum in Washington, D.C. and on the corporate campus of General Mills in Minneapolis, MN. Another familiar work by Borofsky is the Hammering Man series which has been installed in Los Angeles, Dallas, Seattle, Seoul and Frankfort

Burnett Park is a three acre park donated to the City of Fort Worth by oilman Samuel Burk Burnett. The park once featured a central goldfish pond surrounded by symmetrical angled lawns. Over the years the park has been updated and redesigned several times, always with design and financial support provided by the Burnett/Tandy Foundation. Burnett Oil still occupies part of Burnett Plaza, downtown’s largest office building, which towers over the park. Burnett Park has been managed by Downtown Fort Worth, Inc. (DFWI) since 1985. 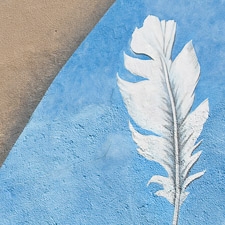