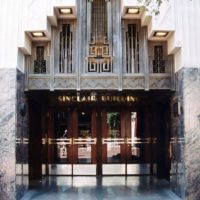 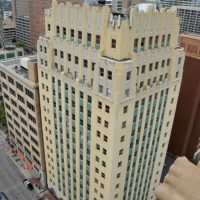 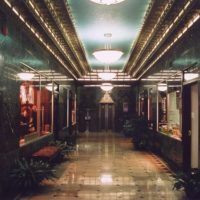 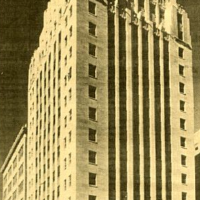 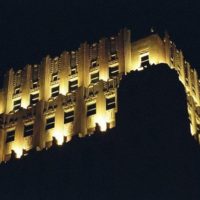 This 16 story building, designed by Wiley G. Clarkson and built by Harry B. Friedman, is one of Fort Worth’s finest examples of Art Deco architecture. The building is more specifically of Zigzag Moderne styling and features many ziggurat elements on doorways, windows, and even in the shape of the building. The lobby is an excellent example from this period. At the 14th floor, eagle finials cap the vertical elements of the building’s shaft.  On top of the 16th floor penthouse, the vertical mullions are capped with alternating height pinnacles. The building is 200 feet high.  In 1990, the building was completely restored by Architect Ward Bogard. The upper floors of the building are illuminated at night. In the wonderfully restored Art Deco lobby of the building are display cases with artifacts salvaged from the building along with before and after photographs. A stop in the lobby is well worth your time. Originally, the building was to be named the Dulaney Building after the owner, but before it opened, Sinclair Oil Co. leased 7 floors, and the building was then named after its main tenant.

On February 5, 2015, it was announced that the building would be converted into a 165 room Autograph Collection Hotel with a basement restaurant and a rooftop bar.  Some support of the hotel will be located in the adjacent STS Tower, and full restoration of the exterior of that building is a part of this project.  In addition to this, the former Hilton Hotel Annex, now known as 815 Commerce, will be converted into 140 fully furnished corporate apartments.  Conversion of the Sinclair Building has already begun.