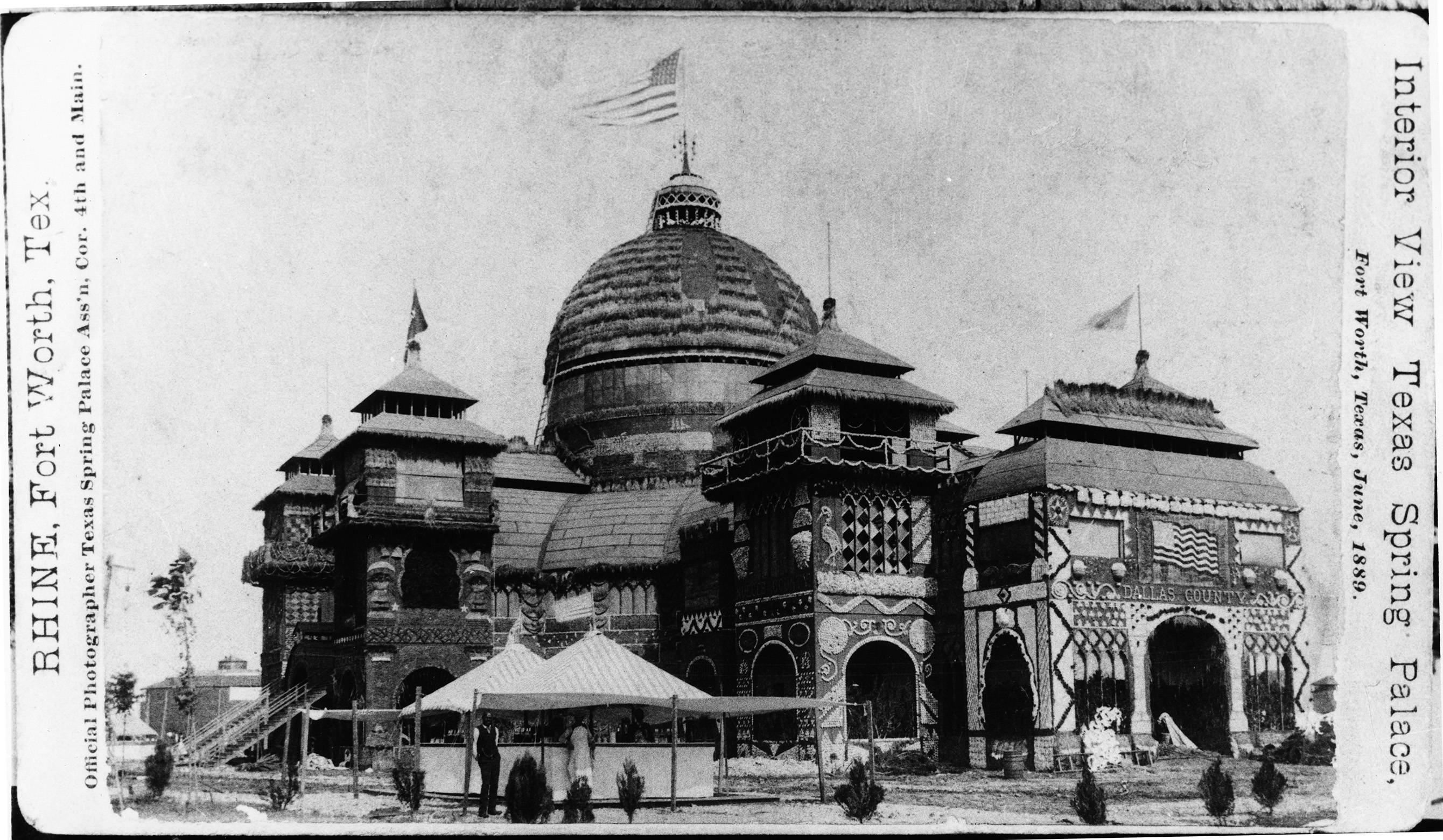 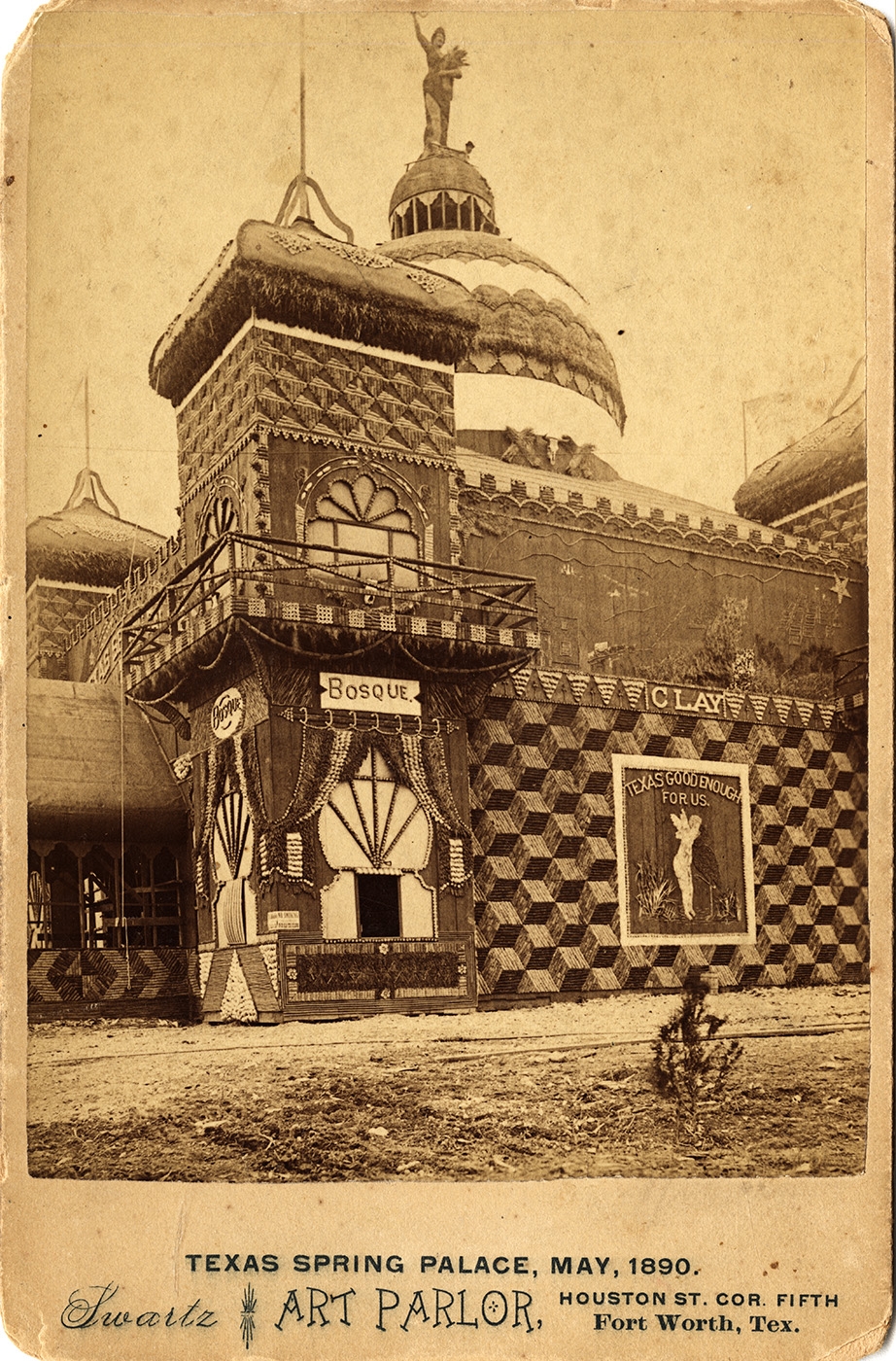 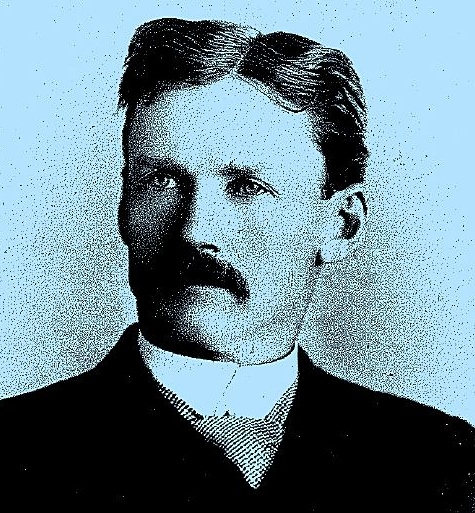 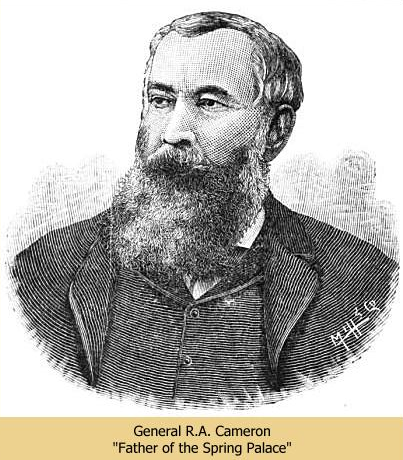 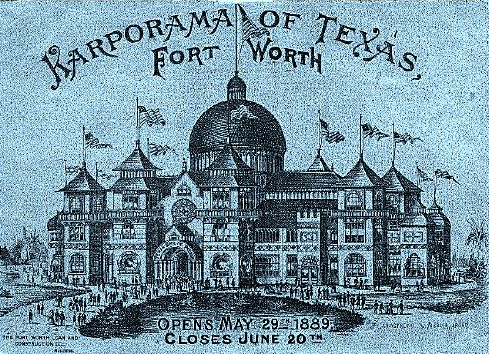 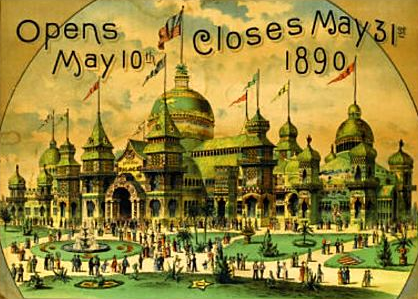 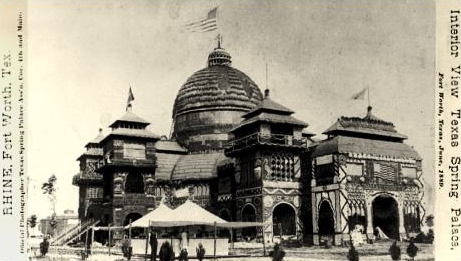 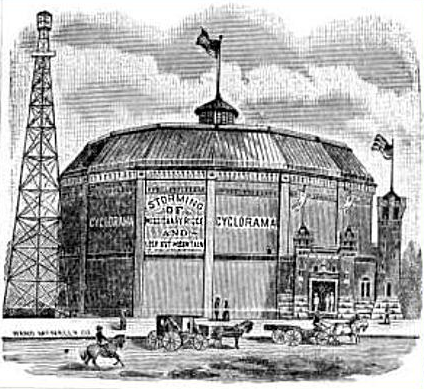 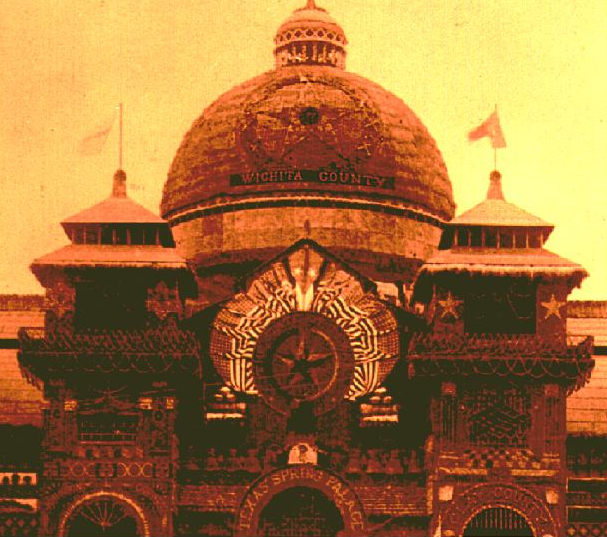 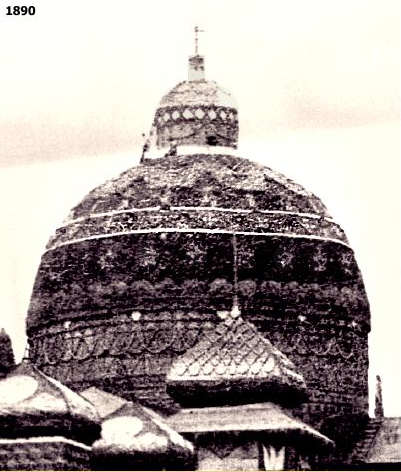 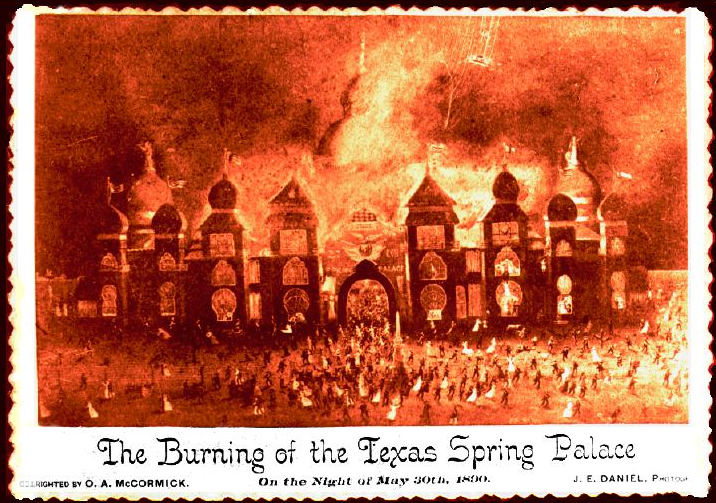 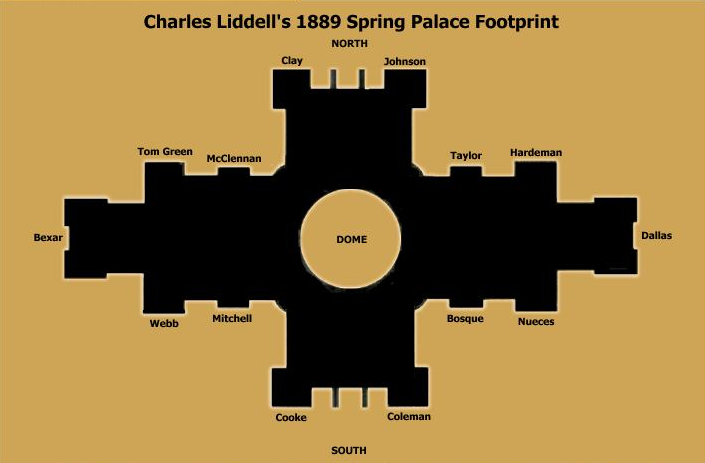 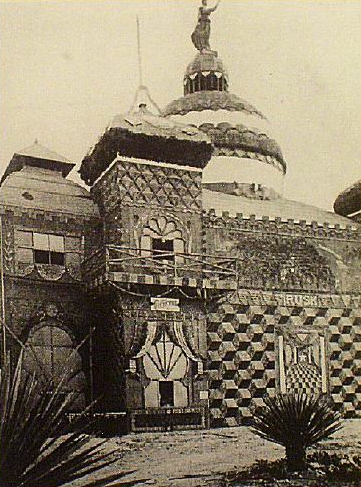 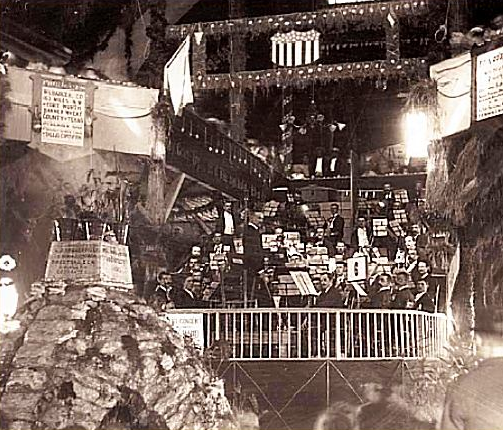 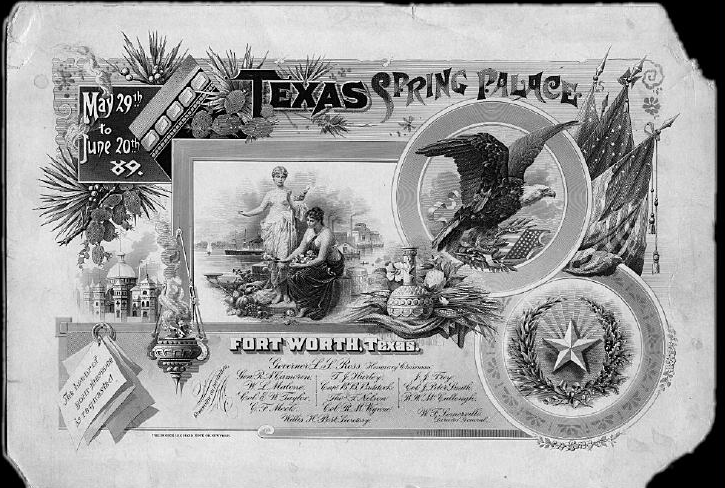 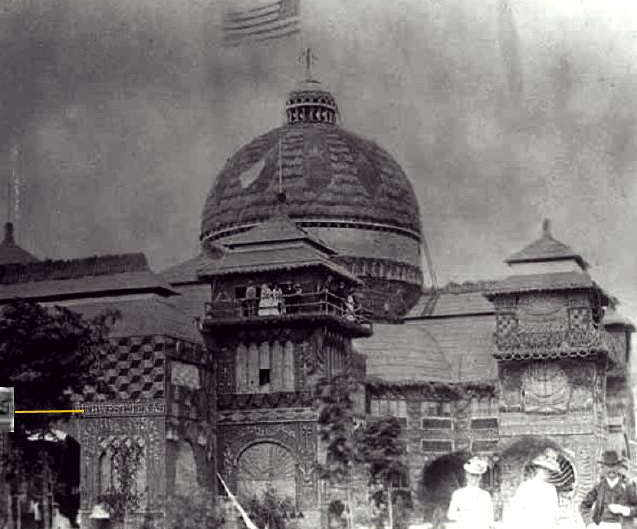 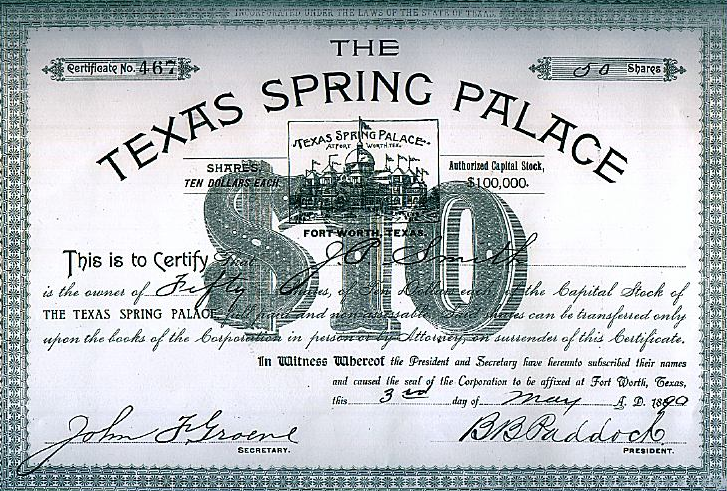 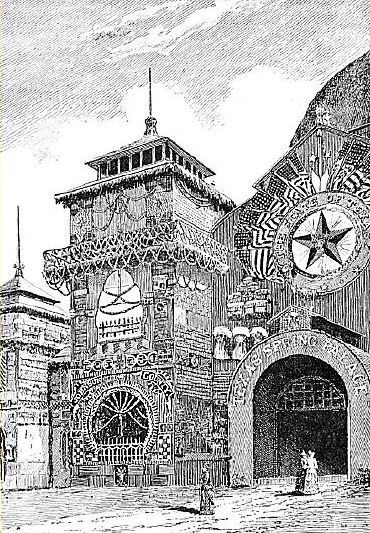 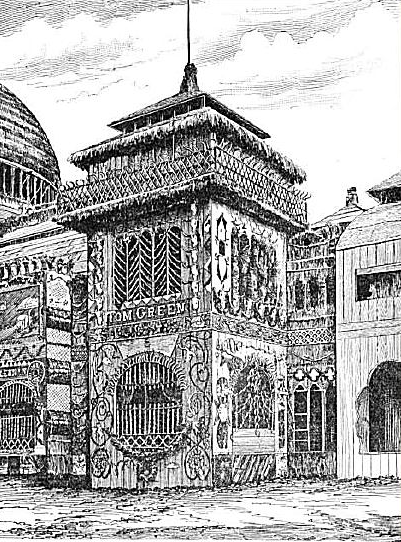 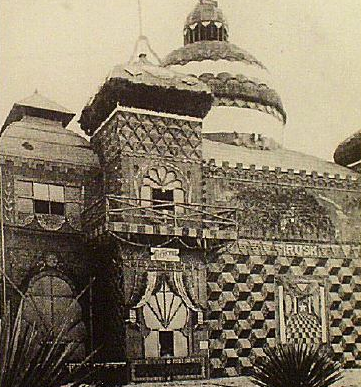 The Texas Spring Palace was inspired by an idea of Robert A. Cameron, immigration agent for the Fort Worth and Denver Railway, and was designed to attract settlers and investors to Texas. Cameron devised a plan to advertise Texas by displaying all the natural products of the state under one roof. Fort Worth’s civic leaders and newspapers quickly adopted the plan and local railroads became co-sponsors of the project. Subscriptions from local businesses and citizens furnished construction funds.  Meanwhile a bandwagon effect spread support for the fair throughout the state. The completed Spring Palace, built in a record time of 31 days by the Fort Worth Loan & Construction Company served as an educational, cultural and entertainment center for Texas residents and guests throughout the month of June. It’s exterior walls were painted a dark bronze green and it’s roof sported both turnip-shaped cupolas and a massive center dome that was exceeded in size only by the national Capitol in Washington D.C. The entire structure was decorated with wheat, cotton and other natural products from across Texas.

The Spring Palace looked like something out of a fantasy world. Inside the oriental-styled exhibit hall the public found neatly classified samples of most grains, grasses, fruits, vegetables and minerals produced within the state. Visitors interested in aesthetic pursuits could also tour floral, historic, scientific and art exhibits or view mosaics depicting Texas scenes, all made from natural products by the women of the state. Over fifty Texas counties contributed to these exhibits.

There were concerts by the Elgin Watch Factory Band, The Mexican National Band, various vocalists, political and religious oration, dances and sporting events during the run of the Spring Palace.

A second season, scheduled for May 10-31, 1890 proved especially popular but ended tragically. In spite of efforts to make The Texas Spring Palace fireproof, a flash fire swept through the building on the night of May 30th levelling the structure in a matter of minutes. Although several thousand people were attending a dance in the Palace that evening, only one life was lost. An Englishman named Al Hayne died as a result of his efforts to save women and children from the burning building.

between Main and Jennings, just south of the T&P Railroad Track