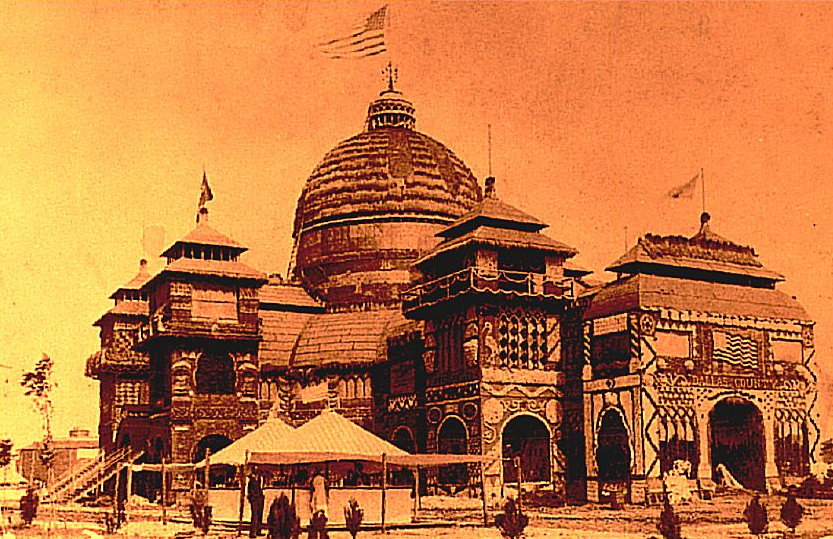 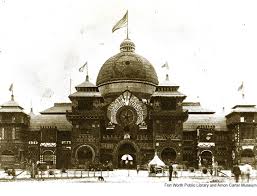 The story of the fabulous Texas Spring Palace is a tale that many in Fort Worth have never heard. I learned about about it in the 3rd grade at Waverly Park Elementary School on the west side of town. Our textbook on Fort Worth history was titled “The Fort Worth Story” and the pages were filled with lots of old photos from the early days of our city. The one that stuck in my mind was the one on this page. It’s as impressive to me today at the age of 55 as it was to me as an 8-year old. When I moved into the T&P Train Station lofts in 2011 I realized that the site of The Texas Spring Palace was just below my window.

After the railroad arrived in 1876 Fort Worth was poised for rapid economic growth. Robert A. Cameron with The Fort Worth and Denver Railway came up with an idea to attract settlers and investors to Texas by building a beautiful building next to the train tracks to showcase agricultural and manufactured products of the State. The Texas Spring Palace was advertised across the nation and in other countries and it attracted lots of visitors in its first season which began on May 29, 1889. It was so successful that it was expanded for the second season which was to be from May 10-31, 1890. On the final night of the second season, May 30th a tragic fire leveled the building in less than 15 minutes. Of the 7,000 people who were attending a celebration and dance that night, only one person was lost. Al Hayne, a British national who was working in Fort Worth valiantly returned time and again to the building to save the lives of those trapped inside. As the building collapsed Mr. Hayne lept from the second story and was taken to the hospital where he died of burns and other injuries. The Women’s Humane Society erected a memorial to Al Hayne which has been moved around a bit over the years but can be seen today in the park in front of the T&P Station on West Lancaster Avenue.

So heartbroken were the citizens over the loss of the popular Texas Spring Palace that they immediately began efforts to rebuild the beautiful building. After Dallas acquired The State Fair of Texas Fort Worth citizens redoubled their efforts to raise money to build a similar attraction here but they failed to raise the money required to rebuild. As this was going on the first Fort Worth Stock Show took place on the banks of Marine Creek in 1896. The success of the early stock show attracted local merchants and exhibitors in 1898 and the money and resources that had been devoted to rebuilding the Spring Palace were redirected to supporting the Stock Show. From this early beginning the Fort Worth Stock Show had the unique characteristic of being a Spring Palace like exposition encompassing more than just the livestock. In 1918 the Stock Show added the world’s first indoor rodeo at Northside Coliseum and the name “Southwestern Exposition and Fat Stock Show” was formally adopted. In 1944 the show was moved to Will Rogers Memorial Center and singer Gene Autry appeared in the rodeo. In 1987 the event was renamed “Southwest Exposition and Livestock Show”. Today we call it “The Fort Worth Stock Show & Rodeo”.

While The Texas Spring Palace was not its direct predecessor, the disappointment in its loss was channeled into support for the fledgling enterprise that became Fort Worth’s famous Stock Show.