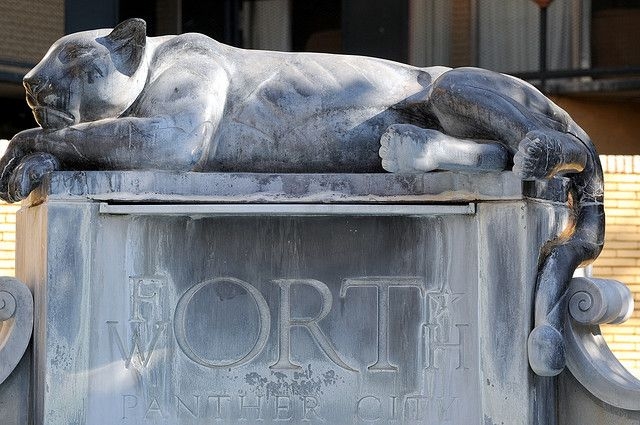 If you’re new to Fort Worth you may start noticing that the city has adopted an interesting mascot and you may sometimes even hear this place referred to as “Panther City”.

Just as Fort Worth was booming in anticipation of the arrival of the railroad the nationwide Panic of 1873 halted construction of the railroad tracks just west of Dallas. The winter had been harsh on the cattle industry and many citizens’ hopes and fortunes were dashed by the indefinite delay of the railroad’s arrival. The population dropped and busine 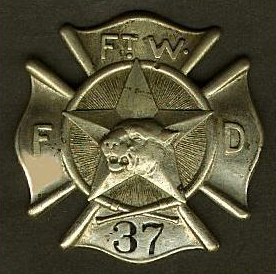 sses closed. The rivalry between Fort Worth and Dallas hit a milestone when a former Fort Worth lawyer, Robert E. Cowart who had moved to Dallas wrote a letter that was published in The Dallas Herald that insulted our city to it’s core. Cowart wrote that the city was in such decline that he had witnessed a Panther sleeping on Main Street in front of the County Courthouse.

Capt. B.B. Paddock who was the Editor of The Fort Worth Democrat and later a four-term Fort Worth Mayor (1892-1900), was an enthusiastic supporter of Fort Worth trade and commerce. In response to the ugly observation by Mr Cowart, Paddock coined the name “Pantherville” and the citizens soon began referring to their town as “Panther City”. When the train finally arrived on June 19, 1876 Capt. Paddock rang the bell from the engineer’s cabin and shouted that the train had arrived in Pantherville. Fort Worth had turned a lemon into lemonade, and the city rallied around their new moniker.

With the arrival of The T&P Railroad Panther City quickly became a boomtown as transportation and the cattle industry expanded as the railroad now connected Fort Worth to other parts of the country. During the boom nearly every business and enterprise in town showed their civic pride by including the panther in their name, their logo or as a mascot. Several shops in town had baby panthers in cages at their front counter. The “P” section of the phone directory was filled with businesses like “Panther Office Supply” and “Panther Plumbing”. Paschal High School named the panther as their mascot and our baseball team was called “The Fort Worth Cats”.  The city’s Police and Fire Departments still feature a panther on their badges to this day. Today a new river-oriented development that will more than double the size of downtown is named “Panther Island” and one of the first businesses to open there is the “Panther Island Brewery”. 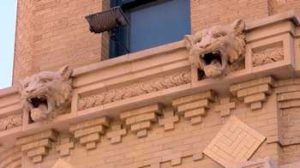 When you visit downtown be sure to see the Carrera Marble panther in Hyde Park behind the Flatiron Building and the bronze panther lounging in the plaza across the street from our County Courthouse. Several buildings have fierce panther heads included in the architectural details, most notably the Flatiron Building. At Christmas-time the building’s panthers are adorned with wreaths hanging from their mouths.